Hope for Hungry Kids (Formerly Operation Feed the Children) was founded initially to help provide funds for the food budget of an orphanage in Kakinada, Andhra Pradesh, India. This orphanage called “Jyothi’s Home For Children” also called “Open Arms” was founded in 1997 by an India native named Jyothi Reddi. Jamey Green, founder of OFtC, met Jyothi in 1986 while in college. He had come to the US to study and once his education was completed he returned to work with his father in his ministry efforts in India.

The plight for children in India is a very complicated situation. Based on political ideas and religious beliefs, children that are born into poverty, lose parents or become abandon somehow are left to die or survive on their own. It is two such children in this situation that Jyothi discovered in 1997, while ministering in a small, poor fishing town near Kakinada. He took those two little boys in and he and his family began to care for them. This was the beginning of Jyothi’s Home for Children.

Jyothi is a minister and does have support for the churches he oversees from the denomination in which he belongs. However, his efforts in caring for these children have very little support apart from private sponsorship. This endeavor has cost him greatly over the years, but Jyothi sees it as a worthy investment.

Through Jyothi’s efforts in raising funds over the years, he has:

As of this writing, Jyothi has 500 children in this orphanage. He receives no funding through his country. He travels to the US once every two to three years to share his needs with friends, churches and organizations. Through these efforts of obtaining child sponsors he manages to care for them.

Because of the dire circumstance of the children in India, it is a perfect target for those who wish to deceive and to exploit those with caring hearts. There are many such organizations in India, soliciting funds from caring people across the world, which do not, nor have any desire to, care for children. Many empty and abandoned buildings serve as props for advertising. People will bring homeless children to these buildings, photograph them in front and use this for fund raising propaganda.

Jyothi is well known by his long time supporters. His life is an open book along with the work that he is doing. Many friends and family of the organization have supported this orphanage for many years. Mike Bradley, one of OFtC’s Board members, has taken a group to India on three separate occasions over the past 15 years to see, first hand, the progress that is being made with these children. Jamey Green has traveled on two occasions to spend time at the orphanage as well. The integrity and the focus of this ministry toward the children is incredible.”

It is the goal of this organization to provide a significant amount of Jyothi’s food budget, in order to give him and his family more time to focus on other needs of the children. We seek to increase awareness of Jyothi’s efforts among friends, family and associates. It is our plans to research and implement any and all fund raising efforts in order to accomplish this goal.

Would you prayerfully consider helping us reach this goal? 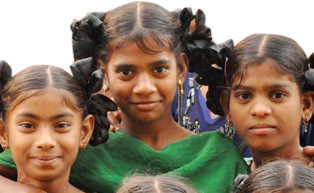 Every dollar makes a difference.
DONATE