Hope For Hungry Kids (Formerly Operation Feed the Children) is an organization that helps provide funds for food to feed the hungry children of the world. We accomplish this by partnering with those that have shown a deep desire and calling to work in these areas and have dedicated their lives to feeding starving children, physically, emotionally and spiritually. Hope for Hungry Kids secures and provides funding to these missions, individuals and other groups so their time is better spent on the mission and not the means.

Hope For Hungry Kids is a nonprofit organization that was founded in 2013 to provide funds for the food budget of an orphanage in Kakinada, Andhra Pradesh, India. This orphanage was founded in 1997 by an India native named Jyothi Kumar Reddi. It would come to be called, Jyothi’s Home for Children. Learn More About the Orphanage 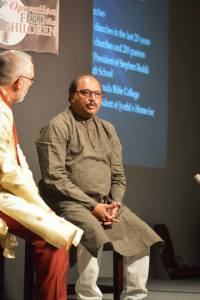 Jyothi came to the United States for the first time in 1987. By God’s grace a great man of God, the Rev. Robert E. Hinson, Senior Pastor, Spring Valley Church of God, PA, was inspired of the Lord to sponsor Jyothi’s education in the United States. Rev. Hinson had become great friends with Jyothi’s father years earlier. Jyothi would never forget his love, kindness and generosity. Jyothi was inspired on his trip back to India, after completing his degree, to help others because he had been helped so wonderfully. He had no idea to what extent that inspiration would be used.

The plight for children in India is a very complicated situation. Based on political ideas and religious beliefs, children that are born into poverty, lose parents or become abandon somehow are left to die or survive on their own. It is one such child in that very situation that caught Jyothi’s attention in 1997, while ministering in a small, poor fishing town near Kakinada. He took that little boy into his home, along with two of his friends that were homeless as well. The sudden impact of 3 additional mouths to feed and care for in a household that was struggling to survive did not sit well with the family nor his new wife, at first, but they soon come to realize the desire of Jyothi’s heart, they caught the vision, and this was the beginning of Jyothi’s Home for Children. The inspiration on his trip home is finally realized.

Jyothi is a minister and an evangelist and he does have support for the churches he oversees from the denomination in which he belongs. However, his efforts in caring for these children exceeded the budgets available for childcare by the time he had reached 30 children. Jyothi would not let budget constraints nor did advice on the contrary, dissuade him from what he knew, in his heart, he should be doing. What Jyothi has been able to do since 30 children is miraculous. 86% of his current budget for 500 children comes through private sponsorship. This endeavor has cost him greatly over the years, but Jyothi sees it as a worthy investment.

Through Jyothi’s efforts in raising funds over the years, he has:

As of this writing, Jyothi has 500 children in this orphanage. He receives no funding through his country or government. He travels to the US once every two to three years to share his needs with friends, churches and organizations. Through these efforts of obtaining child sponsors he manages to care for them.

Because of the dire circumstance of the children in India, it is a perfect target for those who wish to deceive and to exploit those with caring hearts. There are many such organizations in India, soliciting funds from caring people across the world, which do not, nor have any desire to, care for children. Many empty and abandoned buildings serve as props for advertising. People will bring homeless children to these buildings, photograph them in front and use this for fund raising propaganda.

Jyothi is a man of the highest integrity. He is very open and honest with the leaders of his denomination and the friends and private supporters that he has gained over the years. Jyothi’s relationships with some of his supporters date back to his stay in the US. Pastor Jerry Tow and wife Leah of Oakdale Church of God in Charlotte, Mike and Ouieda Bradley, Herb and Sandy Hanna, Rachael Shealy were a few from that church that seemed to be drawn to help Jyothi from the beginning. Mike and Ouieda Bradley, who would become lifetime supporters, first visited India when Jyothi had 30 children. Mike sits on the board of Hope for Hungry Kids and has since visited the Orphanage 4 times to see the progress over the years.

It is the goal of this organization to provide a significant amount of Jyothi’s food budget, in order to give him and his family more time to focus on other needs of the children. We seek to increase awareness of Jyothi’s efforts among friends, family and associates. It is our plans to research and implement any and all fund raising efforts in order to accomplish this goal.

While Jyothi’s home for children is the primary reason for the founding of Hope For Hungry Kids, we do have long range goals of domestic assistance. We at Hope For Hungry Kids would like to move as quickly as possible to fully fund the orphanage and then focus our efforts on a program locally. We have looked at the Backpack program, local food banks and soup kitchens in our county. With any organizational effort in these areas of assistance the possibility exists that some people in need are not getting the help that is available or budgets are much less than the need.

One example of this is the Backpack program. Businesses, churches, etc can adopt a school for the BPP. Non perishable foods are collected at the programs recommendations; it is loaded into back packs and delivered to the school on Fridays. The children who are on government assisted lunch programs are the children that get these Back Packs to take home for the weekend. The churches, etc that are collecting the food never know which children are being helped because of privacy rules and laws. Our interest in this program would be to find a way to provide similar assistance to these same children during the summer months.

We believe that our organization could fill a gap in the existing successful efforts by legally and discretely assisting these families in the summer months with food for their children. This will be a matter of research until we have met our goals for Jyothi’s home for Children. When that is accomplished I hope to have everything ready to move forward with the summer Back Pack Program.

Every dollar makes a difference.
DONATE